UW Extension was offering a composting class in October.  I signed up for two seats figuring that we should learn how to turn our random pile of garden waste into something useful.  My family has been diligently transporting wheelbarrow and wagon loads of weeds, garden waste, and other organic material to a pile off in the “near” woods all spring and summer.  I don’t think it’s quite near enough, though, as they bought me a side by side (UTV) for hauling stuff for my birthday.

Steve seems generally annoyed by my random, growing pile of nonsense, so I thought he might want to learn with me how to transform that into something useful.  I was wrong.  He was definitely not interested.  Nathan agreed to come with me.  I’m not sure if it was pure academic or pragmatic interest or if he just drew the short straw or volunteered as tribute on behalf of the rest of the family.  It’s also possible it was an attempt to reign in my crazy.  If he was there learning with me, he couldn’t be a victim of me making stuff up and saying it was true and making the rest of them haul a bunch of stuff from here to there and build me a bunch of weird things that I can only mostly describe and sort of draw.

I honestly didn’t know what to expect when Nathan and I showed up at the Dane County Extension Office for class that last night of fall in October.  I can tell you that I didn’t expect 4 teachers, 50 students, a PowerPoint presentation, and to find out that we were in a Master Composter Certification Course.  Nathan laughed out loud at me, “Carrie Kish:  Master Composter.  What?  You need another credential?”  I told him that I didn’t really think anyone would believe I was a master composter.  He told me that I didn’t have a full grasp of my reputation and that people would absolutely believe it.

They had us go around and introduce ourselves.  It was mostly people who had a job that required them to do some sort of responsible waste management.  Most of them also live in the city of Madison proper where zoning laws are strict.  And, many of them already hold the certification Master Gardener (foreshadowing my next certification, come spring).  There were three young people there that worked in some kind of a co-op and there were several retired ladies that were super passionate about recycling (I was really glad I brought a reusable water bottle with me).  It was a strange combination of people who probably had guns in their trucks in the parking lot and people who probably have peace stickers on their hybrids.  I kind of panicked when it was my turn to introduce myself.  I didn’t exactly know how to sum up my life in a way that made sense for me to be sitting there among these people.  What I said was, “My name is Carrie Kish.  I’m recently relocated from Los Angeles and I am just trying to figure out how to throw away my garbage.”  They all laughed.  Nathan went next, “I’m Nathan Kish, her son.  I’m here because I’m going to have to build and implement whatever she thinks she needs to do when she leaves here tonight.”  More laughter.

The first half of our class was an introduction to composting.  It was nicely organized and gave us good, easy ideas that weren’t overwhelming.  We had a break and then we rotated through composting labs where we learned about trench composting, compost tea (you don’t drink it), compost bins, large-scale composting, and vermi-composting.  The large-scale composting lab was, by far, the most popular for most of the students in the class.  We skipped it, choosing to focus on small scale composting for now.  The woman teaching the trench composting lab was a super knowledgeable Mennonite who grew up learning how to recycle, reuse, or compost everything in her life.  She seems like she’s pretty close to a zero-waste kind of person.  I was happy I didn’t bring Steve.  He might have used the zero-waste argument to try to get me to stop shopping on Amazon.  I really, really wanted to ask her about using the deep litter method with my chickens.  But, the whole class was filled with anti-chicken propaganda and discussions about the strict zoning laws in the city and about making sure you’re being a good neighbor if you have chickens.  I was embarrassed to admit that I had 15 chickens and that I was hoping to have my chickens be an integral part of my garden and composting cycle.

I have been reading all about the deep litter method of chicken keeping and have gotten local recommendations that it is absolutely the way to overwinter your chickens.  Essentially, you just keep layering pine shavings and leaves in your coop over the top of the chicken poop and you let it compost all winter.  Come spring, you clean it out and have a super compost for your garden.  The added benefit is that as it breaks down and composts, it heats up and provides heat and insulation for your chickens so they don’t freeze to death in their coop over winter.  My coop is well built and cute, but no tech.  It has no electricity, no water, and no heat.  So, we have to find “alternative” ways to care for our flock.  It’s ironic that carrying for your flock without heat, electricity, supplemental lighting, heated water dishes, and running water is considered alternative.  All the ducks, geese, turkeys, deer, and other critters that live around here seem to figure out how to survive without those things and without a nice coop, organic chicken feed, supplemental bugs, and fresh water twice a day hand delivered to their insulated, predator free environment.  I did have to call Erika for trouble shooting help.  My coop was getting stinky (and it’s not supposed to) and it wasn’t getting warm.  It took her a while to ask me enough questions to realize I was doing it wrong.  I was going in with a rake and a pitchfork and mixing it all up and turning it every time I needed to add fresh bedding.  You should have heard her, “Noooooo.  No. No. NO.  Don’t turn it, don’t mix it.  That messes it all up and stops your process.  Just keeping layering.  Easy peasy.  Stop working so hard.”  Oops.  I’m not sure why it’s against my nature to trust this. I really really want to mix it all up still.  But, I am currently exercising discipline and layering and trying to just let it do its magical composting thing.  And, my coop is actually staying reasonably warm, warm enough that my flock’s inside water container rarely freezes any more. Although, it was frozen solid when it got down to 3 degrees a couple weeks ago.  The chickens were fine, though.  And, they’re now a part of my composting process.

We learned a couple other fun things in that class.  We learned about 6 different ways to build a composting bin and decided on the kind of bin we’re going to build and where we’re going to put it this spring.  We also learned about grass composting, which is what we already do at our house, I just didn’t know we were doing it.  We only do it because the guys who mow our 10 acres of grass know what they’re doing and have been doing it since we hired them.  Shout out to MAD Plowing and Mowing for being incredibly awesome!  I also learned that my pine needles should stay under my pine trees for their health and well-being.  Great!  We have a lot of pine trees.  And, we learned all about vermi-composting.  I’ve been kind of obsessed with the idea for about a year since I read the book “Worms Eat My Garbage.”  But, I didn’t think my family would be excited about having a little worm habitat as part of our daily life.  The guy teaching the lab was hysterical and started out by saying, “In the interest of full disclosure, I don’t do this.  It sounds easy, but it’s not.”  I got reinspired at our composting class and bought the worm bin that I’ve been dreaming about on Amazon.  I also ordered my worms.  You need a special kind, red wrigglers.  Despite the disclaimers, I was so excited, I did it right there in class from my phone.  About five days later, I got a funny package with holes in it hand delivered to my front porch with all kinds of sitckers on it:  fragile, handle with care, live bait.  It was my worms!  Yay!  And, uh oh.  My worms arrived before their house did.  Oops.  I texted Nathan:

Me:  I may have made a mistake…

Me:  My worms arrived before their house did!

Me:  And I haven’t even mentioned them to dad yet.

Nathan:  Haha haha.  What are you supposed to do now?

Me:  They are temporarily housed in a boot box.

Nathan:  Uh, don’t they eat cardboard? I’m distinctly remembering the quote: “Worms will get out.”

This was not the help I was hoping for.

Nathan:  Good luck.  I would award you DM inspiration if I could for making a questionable decision in line with your character’s values.

This is a Dungeons and Dragons reference.  I think it’s meant to be a compliment.  Haha.

I had to tell Steve about the worms when he got home, mostly so he didn’t take my boot box to the dump on accident on Saturday morning.  I texted Nathan:

Me:  Well. Dad took it better than I thought he would.  He only threatened to feed them to the chickens as a backup plan.

Nathan: I mean, that’s our back up plan too, so I guess that’s fair. Lol.

You’ll be happy to know that none of my worms escaped their temporary housing and that they have been safely relocated to their stylish new worm condo.

They are happily turning my junk mail and kitchen scraps into compost for my spring garden.

Between my worms, my chickens, and my garden, I think I might really have what it takes to be a master composter.  I am happy for the twelve books on composting that I have to reference and that I can call Erika for trouble shooting help anytime I need it. 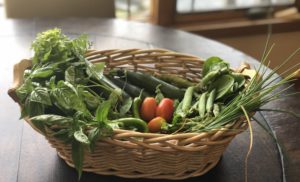 Our chickens have been laying about 10-12 eggs a d

Harrison James is 1 today! Being his grandma gets

A cup of tea in my LA Airbnb 💗 #airbnb #mylittl

Rethinking my life choices this morning. Too much

Happiness is... a whole stack of new journals! #wr

She’s a he! Our “mystery chick” has identif

Our garden harvest is crazy! Our zucchini is fina

The girls have moved out to the coop!

Podcasting with @coachthais. So fun!!!

Look what I found on my front porch this morning.

Loved speaking to The Center for Non-Profit Manage

Had a Blast presenting with #TeraMcHugh today!!!

The Recombobulation Area is where Milwaukee Airport passengers go to collect themselves after going through security.

This was my first experience of Wisconsin, several years ago. It is a classic experience of a pragmatic, optimistic people who are perfectly happy to make up words and immortalize them with signage just for their own (and hopefully other people’s) amusement.

Wisconsin, as it turns out, is the place where I am going to recollect myself and my family and get “recombobulated.”  I hope you enjoy following our adventures.